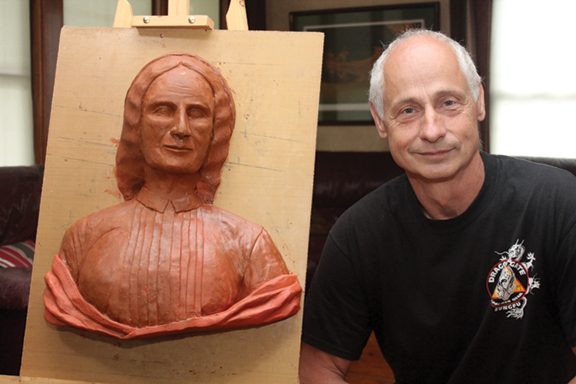 A few months ago, Windsor’s medical community was dealt a staggering blow when the bust of Jeanne Mance was stolen from Windsor Regional Hospital’s Ouellette campus.

Jeanne Mance was born in France in 1606 to a bourgeois family. After her mother died young, Jeanne spent her childhood raising her eleven brothers and sisters. She then went on to care for the victims of the Thirty Years War and the resulting plague.

At age 34, Jeanne Mance decided to travel to what was then called “New France.” After surviving the harrowing three-month voyage across the Atlantic, Jeanne helped found the city of Montreal in 1642.

A bust of Jeanne Mance with a copper finish was kept on Windsor Regional Hospital’s Ouellette campus to acknowledge the hospital’s link to her.

When the sculpture was stolen, that link was severed.

“We felt very sorry that it happened,” Bill Marra, the Vice President of Hotel-Dieu Grace Healthcare for External Affairs and the Executive Director of the Changing Lives Together Foundation, said. “Something of that nature, that honours a legendary nursing figure in Canadian healthcare? It’s really sad that someone had to resort to stealing that.”

The sentiment was shared by Gisele Seguin, the Director of Public Affairs, Communication and Philanthropy at Windsor Regional Hospital.

“It really hurt,” Gisele explains. “When the person that noticed it came forward, she was really, really upset. This was a part of our history. It was significant. There was a feeling of loss. I think Hotel-Dieu really wanted to hang on to Jeanne Mance and who she was.”

However, help arrived in the form of Mr. Dick Wood, a sculptor from Amherstburg. “I read about the theft in the paper,” Dick says.

“I have the utmost respect for nurses. My first wife was a nurse. I know they work their butts off. It’s pretty important. So, I figured they needed a new one. Just seeing that monument with three holes in it—I said, ‘We can’t have that.’ So I offered my services as a sculptor.”

Dick reached out to Hotel-Dieu Grace Healthcare two weeks after the sculpture was stolen. He offered his services free of charge.

“I’m not surprised,” Bill says. “I’ve worked in this community for a great many years and I’m always impressed by how generous the community is. When there’s a need, people step up. And clearly, this local sculptor felt that he wanted to do something about this unfortunate incident. We’re very grateful to him.”

Dick, a millwright by trade, started sculpting thirty years ago. His living room is filled to bursting with carvings of human figures and wildlife.

“It was something to do,” Dick explains. “I never really had any artistic vent before. I just picked up a hunk of wood and a knife one day and it worked out good. Then I got into the human figures. I do have power tools for some things, but for most I generally prefer the quiet feel of a knife going through wood. It feels smooth. If the knife is sharp and the wood is good, it kind of just peels off.”

However, Dick’s interests are not limited to sculpting. Dick’s walls are lined with electric guitars equipped with custom wood bodies. He has built cars and airplanes in his garage. His walls are lined with countless certifications, including some from the American Alliance of Hypnosis and Neurolinguistic Programming. He’s a certified flight instructor and has his minister papers. He makes his own wine. In his spare time, he’s currently building a boat.

In addition, Dick also designs his own gizmos and gadgets. When his daughter started going blind, Dick developed an invisible cane for her. The cane functions like a sonar device, informing the user if there is something in front of them. He used the same technology to create a pair of glasses for fully blind people.

“When I gave it to a blind friend to try, she said to me, ‘This must be what vision is like.’ That really got my heart pumping,” Dick says.

However, when asked to explain his wide range of interests and talents, Dick is nonplussed.

“I respect the history and the importance of nursing,” Dick explains. “They’re the underdogs. Nobody pays attention to them. Most people just see the sculpture, they don’t know the background of it. She was an amazing woman. She was one of the founders of Montreal. And she was the first woman to go into nursing that wasn’t a nun. So she was always an advocate for the downtrodden and the sick. She got off her butt and she did stuff. I admire that.”

Once the new statue is in place, the hospital’s link to Jeanne Mance will be restored.

“What matters is that there’s a monument there to symbolically honour an incredibly important figure in Canadian history and in healthcare history,” Bill reports. “There’s not a lot of individuals that you can date back that many years, that have had such an impact on our community. Who would have thought that some 200-plus years later a hospital would open in Windsor with a direct correlation to her establishing the order of nuns that she did in Canada?”
Regardless, Hotel-Dieu Grace Healthcare is incredibly grateful to Dick Wood.
“I would simply like to extend our most profound gratitude to Mr. Wood for his generosity and his thoughtfulness,” Bill says. “He’s a man that cares about community and about history. And those are qualities that should be commended.”