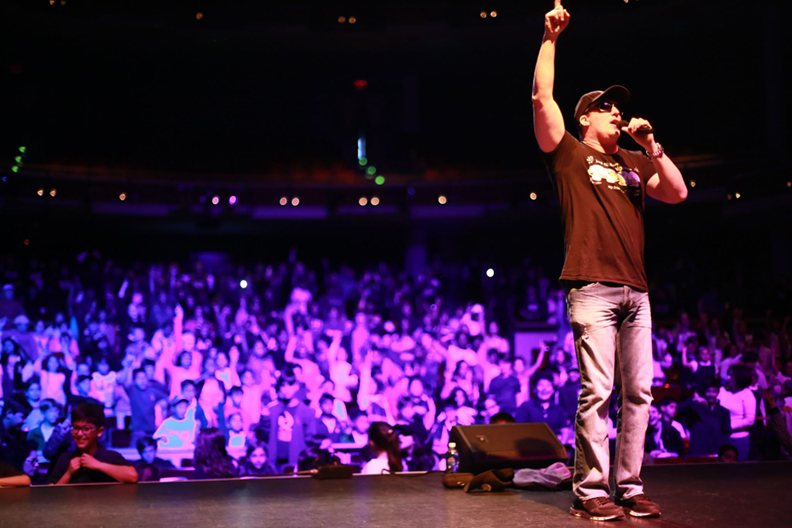 Documenting the Career of Étienne

At the end of May, a documentary premiered on Cogeco’s YourTV network entitled: Pourquoi Take French: 25 Years of Étienne or The Accidental Rockstar.

The documentary was the result of a collaboration between two local artists: debut filmmaker Nicholas Allaire and musician Steven Langlois, better known as Étienne.

The story of Étienne stretches back 26 years, beginning with one supply teacher’s quest to help students grasp French.

“I started teaching, I couldn’t find music that would motivate students,” Steven recalls. “When I looked, all I could find was like a guy sitting on a stool playing a guitar. That kind of kiddie-type music. I knew they wouldn’t buy that. I knew they needed rock and rap, the kind of stuff that they liked. And I always tell people God only gave me one talent and that’s to make music. So I thought, ‘Why don’t I make a couple songs?’ So I made a couple songs to help them learn vocabulary, conjugation, verbs.”

Thanks to his students’ positive response, when his contract was up, Steven used the songs he’d created as a way to sell himself to other French teachers on the board.

“In the old days, teachers had to find their own supply,” Steven explains. “You didn’t just call in sick and the board found you someone. You had to deal with it. So I wanted to introduce myself to teachers and say, ‘Hey, look. Don’t just get any supply teacher. Get somebody who actually understands French.’ There wasn’t a lot in the area, so that’s what I wanted. I shared a couple songs that I did with my grade sevens and eights.”

“The funny thing was, nobody was interested in calling me to be a supply teacher. They just wanted a copy of those silly songs,” Steven says. “It got to the point where boards were ordering hundreds at a time. One day a consultant just blurted out, ‘Oh my God, we have our own Rockstar right here: It’s Étienne!’ She just took my name Steven, and in French it’s Étienne.”

That summer represented a turning point in Steven’s life. He felt as though he were being pulled in two directions: musician and educator.

“I had to think about it, pray about it. What am I going to do? Am I going to be a teacher or a Rockstar?” Steven recalls. “So I decided, let’s go for this. Let’s make a 10-track album. Let’s just see. People needed it. I’ve always been a person who serves. That’s kind of my life goal. This is how I’ll serve, I’ll help people. And it just blew up. The first album went all over Ontario and Canada. The second album went huge. International, all over the world.”

26 years later, Steven has the best of both worlds. He currently works as a full-time teacher at Sandwich Secondary School in LaSalle, and continues to perform and record as Étienne. Hailed as “The Eminem of Children’s Music,” Étienne has taken Steven all around the world, to countries like New Zealand and Australia. He’s created educational music for French, Spanish, and ESL learners. His sellout performances have become multi-generational, as former childhood fans now bring their kids to see Étienne live.

“I’m very busy,” Steven explains. “Literally my life is getting up at 5:30 in the morning and going to bed sometimes at 1. It’s been non-stop for the last 26 years. I continue to live that crazy life where I’ll be teaching Monday and as soon as the bell rings I’ll drive to the Detroit airport, fly to Alaska, the next day I’m doing two huge shows in front of thousands of kids, I take the Red Eye back home, and Wednesday morning I’m back in the classroom, as if nothing happened.”

“I had met [Steven] through a colleague of mine,” Nicholas explains. “I started helping him with various tech things. Being a musician myself, I’m drawn to other musicians and seeing how they do things. He had been in talks about doing some type of show with Cogeco’s YourTV. During those talks the idea of creating a documentary came along.”

“We were having a meeting at Cogeco, and Nick is very talented—he does great animation stuff—so I’m like, ‘Let’s bring him along to this meeting.’ I don’t know what I’m talking about with stuff like that,” Steven recalls. “And the idea that was thrown out there was that there should be a documentary explaining my crazy life. And Nicholas said, ‘I could probably do that.’ And I’m thinking, ‘Yeah, you probably can.’”

The documentary is an hour and twenty-eight minutes long. It was a 10-month long project, involving 35 interviews with different educators and musicians from all over the world. Nicholas’s own artistic career is varied and expansive, spanning multiple different mediums and genres. However, this was his first time working as a director.

After an initial planned three time slots, the documentary has continued to air.

“It was pretty surreal,” Nicholas confesses. “Seeing something that I put time and effort into up on any kind of screen. And the fact that they’ve decided that it was good enough to go on their network is a huge compliment. [Steven] really enjoyed it. He was very happy with the documentary.”

While the documentary is a shining testament to the quality and impact of Étienne’s music, Steven stresses that Nicholas is the real superstar.

“Nicholas is what [this article] should be about,” Steven stresses. “Nicholas is just great. He did a very good job. I don’t think he knew how much he was biting off before he started it, but he flourished. I didn’t know what it would look like, but it’s nothing like what was in my head. It’s ten times better.”

The documentary continues to air on YourTV and is available on Cogeco OnDemand.