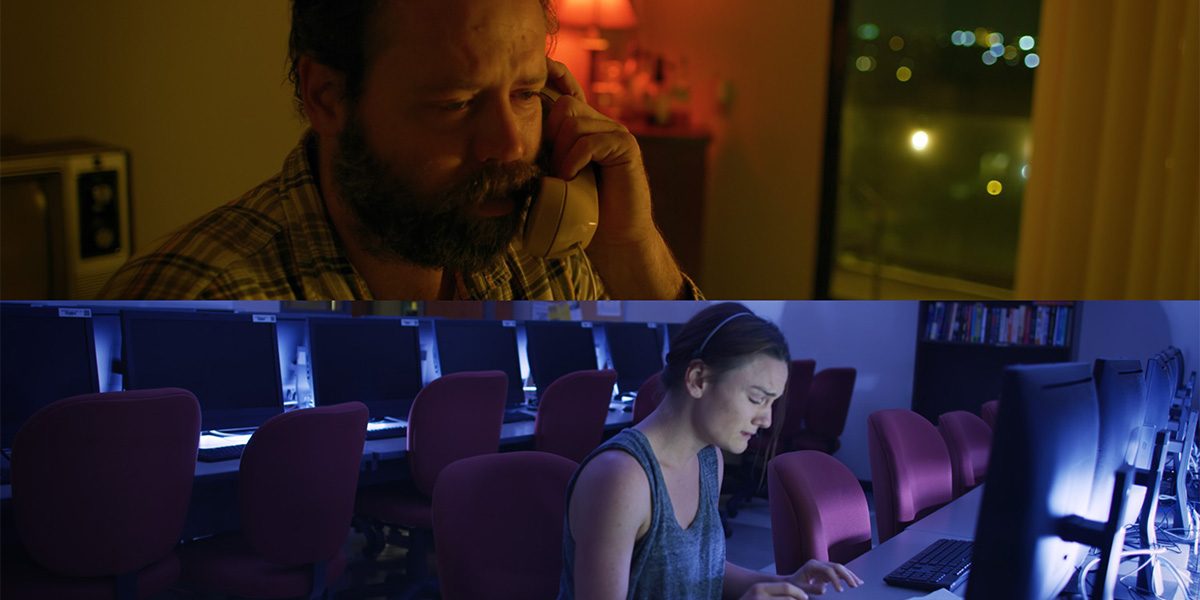 How far would you go to save a stranger’s life? That’s the central question posited by Gavin Michael Booth’s feature film Last Call, which recently opened in theatres around the world.

Although he currently resides in Los Angeles, Gavin grew up in Amherstburg. While in his early twenties, he started dabbling in filmmaking.

“I started out doing some local video productions in the Windsor area,” Gavin recalls. “TV commercials and corporate videos. I later switched over to music videos, which I still do today. Eventually, I got the bug to make movies.”

Gavin’s first few projects were, by his own admission, highly unsuccessful ventures. However, each experience caused Gavin to refine his technique and smooth away his cinematic rough edges.

During this time, Gavin directed several different features and short films, including Do Not Disturb—a drama about a soon-to-be married couple learning some hard truths about each other the night before their wedding—and To Hell, With Love—a thriller about a scientist trying to prove the existence of the afterlife. The latter screened at the Fantasia Film Festival in Montreal, one of the world leader’s for genre film festivals.

Thanks to the success of To Hell, With Love, Gavin was able to meet with high profile producers in Toronto. One of the ideas he floated by them was what would eventually become his first theatrical release: The Scarehouse.

The film was inspired by Gavin’s time at Windsor’s Scarehouse. “The movie was born out of my experiences in Windsor,” Gavin states. “Growing up, my best friend Sean Lippert owned the Scarehouse Windsor, the haunted attraction that appeared every October. It was a typical family funhouse that would scare the wits out of you to get you into the Halloween spirit. And by being friends with Sean, I was able to go behind the scenes and see the mechanics of it. I became fascinated by it.”

The Scarehouse tells the story of six college girls attending a party inside an elaborate Halloween funhouse. Once inside, the girls realize that their hosts’ intentions are not all fun and games.

“When I was writing it, I thought, ‘What’s stopping someone from opening a haunted house, inviting people that they have an issue with and murdering them?’” Gavin recalls. “Their screams would just blend in with the horror atmosphere. You could even hang the bodies on display and people would think they were just really cool effects!”

The Scarehouse was, appropriately enough, shot entirely in Windsor’s Scarehouse, the attraction that inspired it.

“There was no better place to shoot than there!” Gavin laughs. The Scarehouse was released by Universal Studios in 2014. “We were able to hold our world premiere at Lakeshore Cinemas,” Gavin states. “That was six years ago, and the film is still finding a life. I actually just received by mail the Special Edition Blu-Ray … from Germany. I can’t read any of the text inside the booklet or understand the German dubbing, but it’s really cool to see! I have strangers tweeting at me telling me they saw the movie on streaming platforms I’ve never heard of.”

Thanks to the release of The Scarehouse, Gavin was able to qualify for a green card to work in the United States. Shortly thereafter, he and his wife, actress Sarah Booth, moved to Los Angeles in 2015.

After years of networking and shooting short films, Gavin teamed up with writer-actor Daved Wilkins to create his latest feature film: Last Call.

“Last Call is a very simple story,” Gavin explains. “It’s the story of a man named Scott who has called a suicide hotline to find someone to talk to in his final moments. However, because he’s been drinking, he ends up misdialing by one digit and ends up connecting with Beth, a night janitor at a local college. When she realizes why he’s calling and what he’s planning on doing, she decides to stay on the phone with him and change the outcome of the night.”

Last Call is both a tour-de-force, both as a narrative and as an elaborate experiment in filmmaking.

“It’s a fairly simple story, but the way we shot it was overly complicated,” Gavin admits. “We shot the whole movie in a single take. No hidden cuts. Nothing. From action to cut, the whole movie plays out. In addition, the movie is shot on split-screen, so you’re watching both halves of the narrative play out simultaneously.”

“You see everything play out live, on both sides, where nothing can go wrong,” Gavin explains. “Essentially, we shot two single take movies. At once. I don’t recommend anyone else try this. People kept saying, ‘You’ll never get this in a single take!’ And we said back to them, ‘You might not. But we will.’”

The film was a passion project for Gavin and Daved Wilkins (who played Scott). Filmed on a shoestring budget, they were only able to afford 10 days of rehearsal to get everything synched up—the acting, the lighting and the audio.

“We filmed every single rehearsal,” Gavin notes. “That way even the camera operators could get their practice in. We treated our dailies like an NFL take. We could make all of our adjustments based on that.”

Last Call was shot on two floors at the St. Clair College’s Media Plex, the streets of downtown Windsor and a 17th floor Victoria Park apartment.

“There were so many logistics,” Gavin states. “We had to figure out how to light and hide all the cables and fixtures. Balancing the outside lights with the interior lights. Making sure no one stepped into the shot on the streets. Having the performances sync up over the phone. It was 10 days of constant panic!”

Despite the overwhelming hurdles involved, Last Call was an overwhelming success. The film received two standing ovations at the Chinese Theatre in Los Angeles.

“The most rewarding thing is the audience response,” Gavin admits. “And just getting to see the power of this narrative. I’ve seen a lot of grown men crying in the theatre.”

On September 18th, Last Call was given a North America distribution deal with Mutiny Pictures, which includes a limited theatrical run in Windsor.

Gavin celebrates his beloved hometown for making this achievement possible.

“We needed full-time access to several locations for 20 days to make this movie,” Gavin states. “I can’t imagine being able to make it anywhere other than Windsor. Windsor has always been incredibly giving. Businesses will generally open their doors for you. They’re happy to see art being created in their hometown.”

And for Gavin, creating great art is the ultimate goal.

“Some people will say to me, ‘My film’s going to open at Sundance! I’m going to be the next Tarantino! I’m going to get picked up by Miramax or Disney and direct a Star Wars movie!’” Gavin explains. “But the reality is, you just want to make a movie that’s good enough that people are willing to pay to see it. And hopefully, that gets you to your next job. That should be the goal. Everything else that happens is amazing.”

The film will be available for home rental on October 27th.