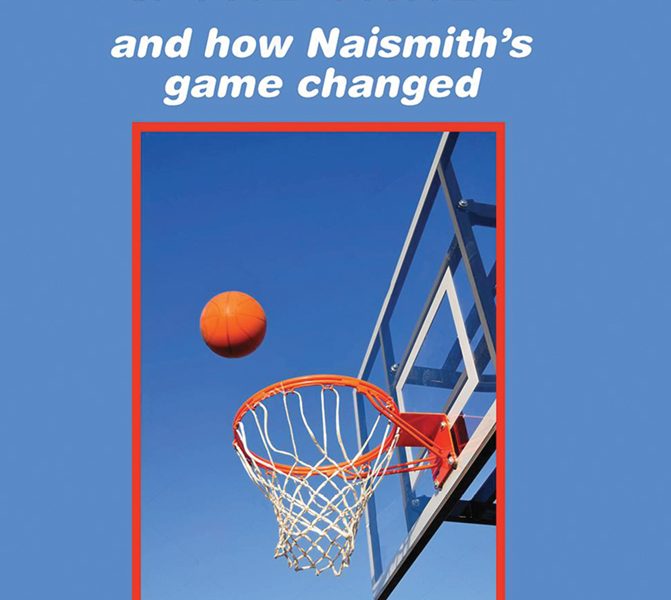 The Dynasties & The Three

Bob first started playing basketball in high school before going on to compete for Wilfrid Laurier University. He even won the Windsor Alumni National Basketball Championship.

“I always loved coaching,” Bob explains. “Particularly at the high school level. I just loved the kids. They make you feel young again! They inspire you. I taught at a couple schools that were in slightly disadvantaged neighborhoods. We were able to pass along special things that those kids wouldn’t have gotten, had they not been involved in sports. That was my favourite part of coaching. And they give back to you way more than you give to them.”

Between playing and coaching, Bob found time to also teach English and serve as the Principal at Forster Public Secondary School. After retiring, he decided to combine his love of writing with his love of the court.

And that’s how we got 2016’s Basketball Rules Here.

“The first half of the book was about the history of the game,” Bob states. “The second half of the book—the best part!—is where 24 different basketball coaches from across Windsor and Essex County wrote articles about their school’s basketball program. That included the Windsor Alumni, the AKO Fraternity, St. Clair College, Windsor Valiants, Tecumseh Girls and more! They all have stories to tell.”

The book also involves a panel of coaches who selected the best 55 players in the last 55 years. Of those 55 they selected Mike Berkovich as our local MVP.

“He was a great, great interview!” Bob explains. “Everyone was! Meeting with all those coaches and hearing their stories made writing the book so much fun!”

Bob’s first book was also partly inspired by his time volunteering at the Hospice of Windsor and Essex County.

“I got very, very involved in their programs after I retired,” Bob states. “I did some special events coordination for them. It was fun to do. And I really enjoyed their bottom line.”

Basketball Rules Here raised over $20,000 for the Hospice of Windsor and Essex County.

“It was great!” Bob laughs. “It was absolutely amazing! So, when it came time to do the second book, it was natural to turn to them.”

Bob’s second book is entitled The Dynasties & The Three and how Naismith’s game changed.

For instance, the book points out that, when basketball was invented in 1891 by Dr. James Naismith, there was no dribbling!

“You just passed the ball from one player to another and then shot!” Bob states. “Dribbling was introduced shortly thereafter. Basketball used to be a rough game. In the early 1900s, it was often referred to as indoor rugby. They used to build cages around the court because players were getting killed being thrown up against the wall!”

The book is a fascinating examination of how one of the world’s most popular sports has changed over time.

And some of the most significant changes, Bob notes, were introduced in the last 50 years.
“In 1967-68, the NCAA banned dunking,” Bob explains. “And what most people don’t know is that it was banned for about 12 years. They explained that there were too many injuries and too much equipment being damaged. But according to Kareem Abdul-Jabbar, a famous American player, they were doing it to keep black people from dominating the game. But, they never banned it in the NBA. And it’s one of the most exciting parts of the game.”

And most importantly, while taking the reader through the global history of basketball, the book also narrows its focus to incorporate local history. Albeit taken from a different angle than the previous book.

“Windsor was the Basketball Capital of Canada for many years,” Bob states. “A writer by the name of Brian Daly described Windsor to Victoria, British Columbia, as the ‘axis of basketball excellence.’ Windsor has won over 32 Canadian National championships. No other community in Canada can match that!”

“Those dynasties are described in detail,” Bob explains. “And for one chapter, a panel of former and current coaches got together and nominated over 100 women players and chose the top 60 players in the last 60 years.”

The book is a celebration of both everything Windsor has contributed to the sport of basketball, and everything it continues to contribute.

“We still produce great basketball players!” Bob laughs. “It was only in 2015 that we won the Women’s National Championship. And the Windsor Express also won in 2014 and 2015! We’re an amazing sports community. Even a little town like Chatham has won national championships. We live in a very, very special area.”

And once again, all the proceeds for this book are going towards the Hospice of Windsor and Essex County.

“We’re hoping to raise as much money for this book as we did for the previous one,” Bob explains. “We have corporate sponsors, to ensure that the cost of printing—and that everything else in the book, the publishing, the editing, etc.—is totally covered. That way every single dollar that a person spends on a copy of the book goes directly to Hospice.”

In addition, the book was dedicated to Bob’s deceased brother, Scott Turner.

“This book is a Hospice project dedicated to the late Scott Turner,” Bob writes.
The book is available from Hospice themselves, either by phone (519-974-7100) or by email (LSabatini@thehospice.ca).

“You can buy the book there,” Bob states. “And you can pick it up there, or Hospice will offer you four or five different locations where you can go and pick up the book. Or, we will deliver it to you.”