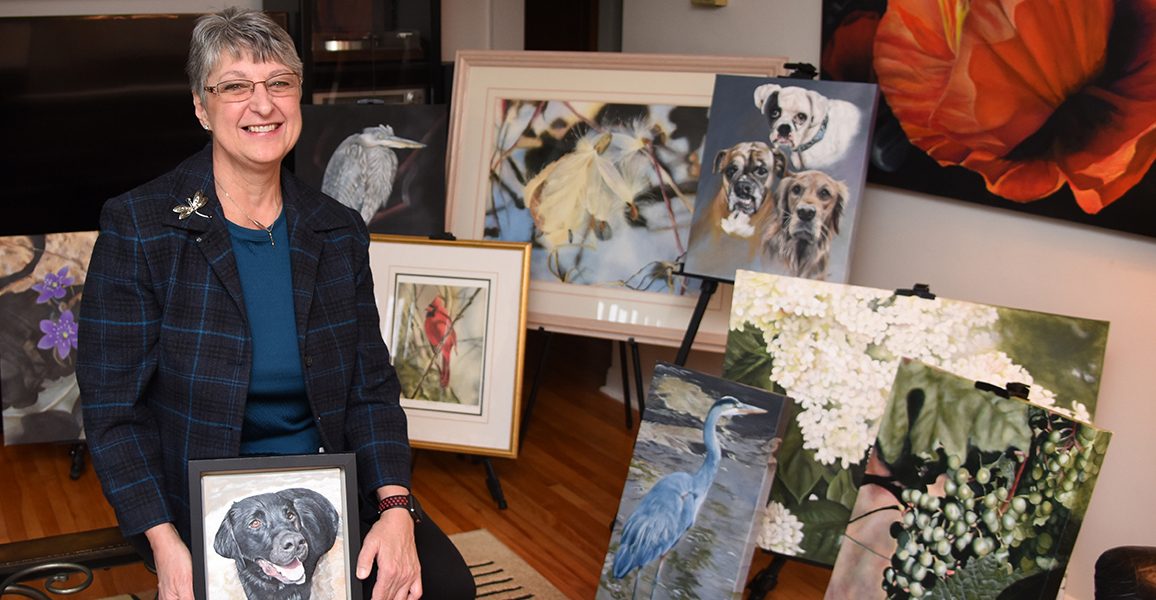 Lorraine’s love affair with art is a lifelong one. However, recently that love has stretched beyond the confines of her sketchbook, touching the hearts of thousands.

“I grew up on a farm outside of Thamesville,” Lorraine explains. “Which is where a lot of my art came from. I didn’t study art in school. It came to me naturally through my Mom, who loved art and studied Fashion Design before she was married. We had a big family of seven kids, and one black-and-white television. I’m sure there was lots of commotion in the house, back in those days. So, sometimes my Mom would shut the television off and make us draw something!”
Lorraine’s services were in high demand, even then.

“By the time I was in grade six, I could freehand draw anything I liked,” Lorraine recalls, “Sometimes at recess the teachers would call me inside to draw things on the chalkboard to keep the other kids interested. By the time I got to high school, it was one of my favourite subjects because I knew I could do well and get a great mark.”

After high school, Lorraine’s peak hit a bit of a valley as she started her career and a family.

“Art sat on the backburner for a while,” Lorraine states. “Then, after I got married and had kids, I decided to start doing some more art from home. And, to my surprise, the people that I showed it to were interested in learning from me. So, I started teaching.”

Lorraine taught Tole style out of her home for 15 years. However, art once again fell to the wayside while Lorraine’s husband Dwight underwent treatment for cancer. Eventually, Dwight recovered, but Lorraine suddenly found herself out of work following a bee sting.

“I was working at a garden centre when I got stung by, of all things, a honeybee,”

Lorraine explains. “Ten minutes later I couldn’t breathe. On route to the hospital, my EpiPen almost caused a heart attack. After that, they determined that I was too high risk to keep working because of my family history of heart disease. So, while at the hospital, I had to give up my job. And I cried the whole way home.”

Unsure of what to do with herself, Dwight and her sister Pat gave her the kick in the butt that she needed.

“‘Just go back to your art!’ Dwight said,’” Lorraine recalls. “He just kept nagging at me to start painting!”

Buoyed by her husband’s pestering, one day, Lorraine put down her well-worn sketchbook and picked up a canvas.

“I painted a Carolina wren, that first day,” Lorraine states. “It was just a little bird sitting on a branch. I called the piece, appropriately enough, “Out on a Limb.” I thought it described where I was at pretty well. I was out of a job, and I wasn’t sure what I was going to do.”

When Dwight came home from work later that day, he had an interesting reaction to the piece.

“He didn’t believe I’d painted it!” Lorraine laughs. “I said, ‘Of course I did! What do you think I did? Went out and bought this?’”

And again, Dwight turned out to be Lorraine’s greatest supporter.

“He said, ‘You can’t keep it.’” Lorraine recalls. “He said that if I could paint that well, then I had to let other people see my work. And I said no. I told him that I wasn’t at that point yet. And he said, ‘Yes, you are. All you have to do is show your work and people will come. I’m telling you, this is what you should be doing.’”

Lorraine ended up following Dwight’s advice. After Pat set her up with a Facebook page, Lorraine started sharing her paintings and sketches with the world.

“I never wanted to do what other people were doing,” Lorraine states. “I always wanted to follow my own path. And because I never studied art in school, I was able to come up with my own style. It worked for me! I never questioned it. I just increased my ability to do the work.”

Lorraine’s style has improved in leaps and bounds over the last three years. Her paintings are hyper-realistic natural closeups. From blue jays resting on pieces of driftwood to milkweeds blooming in the morning light, Lorraine’s breathtaking images are rendered with an exacting precision.

“When I paint a dog, it’s nose looks wet,” Lorraine explains. “Painting allows for a greater depth of colour than sketching. It becomes something 3D, not two-dimensional. The more 3D I can make a piece, the happier I am about it.”

And if Lorraine’s art has a singular goal: it’s harmony.

“Painting is a very spiritual experience for me,” Lorraine states. “When I paint, I’m lost in my work. I feel like I’m on the canvas, moving things around. And I want to expose the beauty that we have here, living in our area. All of my artwork is from Ontario. There’s so much hidden beauty in our home. I want to show people the trilliums. I want to show people the canopies, the shadows, the wildlife. Everything is interconnected.”

While Lorraine finds it difficult to narrow down her personal favourite piece, there is one that continues to mean a lot to her.

“Every piece has a memory and a special place for me,” Lorraine admits. “But, one that means a lot to me is ‘Enduring Love.’ It’s a painting of two mute swans from Long Point. They had just touched down on the water, so the look on their faces was one of intrusion. But, you can see that they are definitely a pair.”

The painting has taken on special significance for Lorraine after the passing of her husband late last year.

“The mute swans mate for life,” Lorraine explains. “When one of them passes, the other one remains by itself. It’s so similar to what we are as husband and wife.”

And while Lorraine may have lost her greatest supporter in Dwight, her sister continues to pick up the slack.

“Pat encouraged me to start showcasing my work,” Lorraine states. “Today, without Dwight, she still pushes me to become better and is my biggest advocate!”

What’s more, the public response her work has received is nothing short of overwhelming.

“It’s been very rewarding,” Lorraine states. “The pride and encouragement are unbelievable. You can put a price on something, but it never compares to the compliment that you get from someone that you don’t know. It makes my face hurt from smiling so much!”

Lorraine can be reached by email at dwight_moon@hotmail.com or through Facebook: Moonshine-Designs by Lorraine Moon.