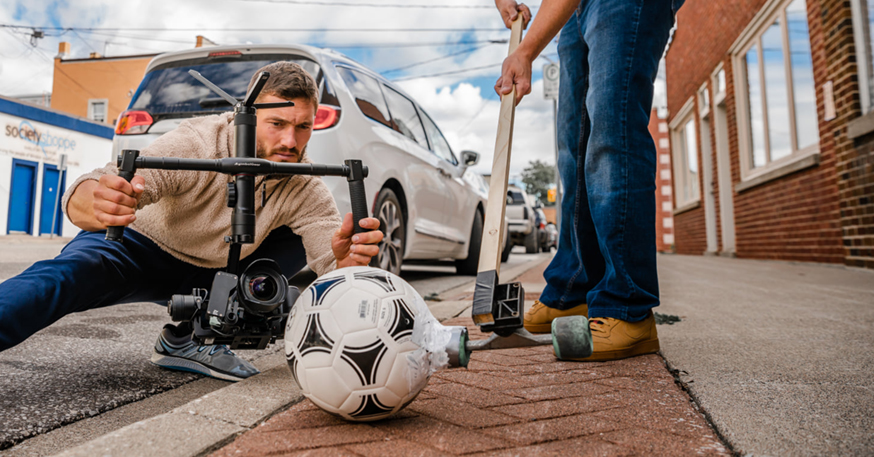 Oh, and the main character is a soccer ball.

Balls! is the result of a collaboration Jakob and two fellow University of Windsor Film graduates: Alexander Forman and Milos Savic. The three friends have been making films together for years, all united by the same burning passion to create.

And for the three of them, this desire was ignited from an early age.

“I remember getting home from our family cottage when I was seven years old,” Jakob recalls. “I was flipping through the channels and found something that looked like Star Wars. And I thought, ‘Oh. This is kind of interesting.’ Then, one of the characters mentioned jamming the radar. And then they threw giant can of raspberry jam at the enemy radar.”

When it comes to Milos Savic, he describes filmmaking as a lifelong cheat code.

“When I was in the sixth grade, we had to write a book,” Milos explains. “And I hated writing! So I asked the teacher if I could make a movie. And she said, ‘Sure. If you can.’ So, I made this short movie and showed it to the class. And, looking back, it wasn’t very good. But, the reaction I got was crazy! I remember just standing there, watching the teacher and all my classmates laughing. I got an A+. From then on, whenever I had to do a big project, I made a film. It was my cheat code. Eventually, I decided I wanted to do it forever.”

After years of collaborating, the three friends decided to participate in the 2020 RODE Reel Contest, the largest short film contest in the world.

“We’d entered the contest a couple times in the past,” Alexander states. “This year we were just kind of sitting around wondering what we were going to do for our entry. Or if we were even going to do an entry, because of the pandemic.”

The group ended up moving forward with an idea Jakob had developed back in university.

“In its earliest iteration, it was probably something about trick shots,” Jakob explains. “Something about different soccer players doing different trick shots. Then, someone would boot this ball away, and we would just follow its journey through major life events.”

Balls!, as Jakob explains, is a three-minute short film about a soccer ball’s journey through life. It begins in the 1930s with its career as a journalist, before it’s drafted into the Second World War. After being injured, the soccer ball falls in love with its nurse. The two go on to get married and have a child (a smaller soccer ball).

“It’s like a Pixar movie!” Jakob states. “It’s all about connecting with this character.”

Balls! was shot over the course of three days in September of last year. However,
despite the humble runtime, the trio underwent weeks of pre-production to obtain
all the necessary costumes, locations and effects.

“Our biggest obstacle was the sheer production value of the project,” Milos states. “Even though it’s a short film, we had six different locations, a number of vintage cars and a ton of extras. We had to prep as though we were shooting an actual film, condensed into three days.”

In addition, the team had to overcome a number of technical hurdles to bring their vision—and hero—to life.

“We made the film about a ball, so we had to find a way to make it move in a realistic way,” Jakob explains. “So, ultimately, this movie would not have happened without Milos. Alexander and I could write funny scenes about soccer balls to our heart’s content, but we needed someone with the technical experience to bring the character to life. So Milos built these rigs that he attached to the soccer ball, a pole that we could use to get the POV shots. He just had all these cool things rigged and ready to go!”

“We all had our individual roles,” Milos states. “Jakob was the director. I was the Director of Photography. And Alexander was the composer. But, we were all producers. And that’s the thing about this crew. It was just us and a couple of hands. But everyone really stepped up.”

Jakob credits the success of the short film to the trio’s trust and versatility.

“This team is so strong because we’ve worked together in the past,” Jakob states. “We understand where each of our individual strengths lie, and we trust each other. If I need Milos and Alexander to do something, I know that it will get done. And it goes both ways. If they need something from me, they know I can deliver.”

The team also brought in Ben Granger to put together all the visual effects during the climactic war scene.

“He’s a VFX whiz!” Jakob states. “We’d love to get him back for some future projects.”

Alexander also composed an original soundtrack for the film.

“I’ve been playing music since high school,” Alexander explains. “But, I haven’t really sat down and wrote any soundtracks in the last couple of years or so. This was the first one I’ve done since university. It was a little bit scary for me, because I just learned how to play the piano last year. So, I really tried hard to match the instruments to the period. I was pretty happy with the end results!”

Although the short film did not win the 2020 RODE Reel Contest, the three were blown away by the response their project generated.

“This is probably the biggest project we’ve done locally as far as notoriety goes,” Alexander states. “Usually when we make a film we just kind of share them around with our friends or post it online. But this film has grown legs of its own. It’s been really cool to see the whole community gather around this project.”

“I recently moved to Toronto,” Milos explains. “And I’ve had people ask me about it here. They’ll say, ‘Oh, I saw it on this or this.’ I was really surprised by that. And at the end of the day, all it takes is one person saying, ‘Hey, this is really cool.’ That makes it all worth it.”

The short film, and an accompanying behind the scenes video, is currently available at Youtube.com/FunUncleVideos.

“It’s the top result on YouTube if you type in fun uncle balls,” Alexander reports. “I checked.”