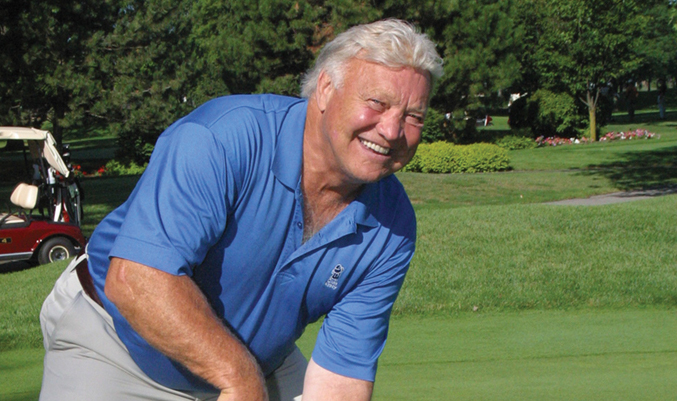 Part III: Beach Grove’s Reputation Grew to Such a Degree,
Over the Decades, that the Celebrity Set Took Notice

A rumor persists that mobster, Al Capone, visited Beach Grove and possibly stayed the night in one of the rooms available to members. Capone was an infamous Chicago mobster who went by the nickname “Scarface”. Capone rose to prominence during America’s “Prohibition Era”, which began in 1919 when the U.S. government passed the 18th Amendment, outlawing alcoholic beverages. It really succeeded in creating lucrative industries in “bootlegging”, “rum running”, and “speak-easies” (illegal bars). Capone was at the heart of it, and so were various Canadian distillers, particularly those positioned along the Canada/U.S. border.

Beach Grove Centennial Committee Chair and Vice President, Karl Straky, says, “I don’t know if people have heard the story—don’t know if it’s true—but I have heard it a couple of times, that the famous Al Capone slept upstairs, here at the Club, one night… We used to have bedrooms upstairs above the men’s Stanley-Thompson Lounge…”

There are, however, stories of celebrities visiting Beach Grove that can be verified.

Throughout the 1960s, celebrities took notice of the Club. Members who were around then remember the sightings and hearing the stories. One such person is Manz Contracting Services Inc. owner, and 48-year Beach Grove member, Dave Batten.
“I began playing golf at age five,” Dave remembers, “and I started at Beach Grove when I was thirteen years old.”

In 1965, Dave applied for a job with Alf Hill, Golf Club Professional, cleaning golf clubs and caddying. One afternoon, Alf called over to Dave: “Grab your clubs! I need you to fill-in with a foursome that’s waiting on their fourth.”

Dave headed out to the first tee. There, he saw the group—and did a double-take.

“One of them was Engelbert Humper-dinck,” Dave recalls.

The English pop singer was at the height of his fame. He was in Windsor performing at the Elmwood Casino on Dougall Avenue. Back in the day, entertainers such as Sammy Davis, Jr., Sonny and Cher, and even the infamous Lenny Bruce, performed at the venue.

“I golfed a few holes with them,” Dave remembers. “I was so nervous. Engelbert was great, though, just enjoying the course. Around the third or fourth hole, the missing guy showed up and I left the game.”

Later, in the locker room, Engelbert posed for photographs with members and signed autographs. As he was leaving, Dave called after him, half-joking: “Can you get me into the Elmwood to see the show?”

Into the 1990s, celebrities could be found in profusion at Beach Grove.

A main draw for celebrities for two decades was the annual Mio Manz Charities Celebrity Golf Benefit, which Dave Batten created with his friend, former NHL goaltender, Eddie Mio. After the first couple of years, the benefit was held each year at Beach Grove, raising money for the Sunshine Foundation of Canada, among other worthy causes.

In organizing the inaugural event, one of the first phone calls was made to an old teammate, whom Eddie Mio knew from his days with the Indianapolis Racers in the World Hockey Association. Eddie was a senior player there in 1978, and he was paired with a skinny 17-year-old kid from Brantford, Ontario named Wayne Gretzky. Years later, after winning Stanley Cups with the Edmonton Oilers, Eddie was best man at Wayne’s wedding.
Wayne Gretzky agreed to be part of the event.

Among those at the first event was John Chisholm, former owner of Rose City Ford. A few years later, he brought Jim O’Connor, President and Chairman of Ford Canada, who generously enlisted his considerable resources to help.

Dave Batten was not without his own Rolodex. He called old friends, such as Eddie Murray, one-time kicker for the Detroit Lions and Super Bowl champ with the Dallas Cowboys. The event took off from there.

Another celebrity who turned out for the Celebrity Benefit was saxophonist, Alto Reed, a long-time member of Bob Seger and the Silver Bullet Band. His work includes the sax intro to the Seger classic, “Turn the Page”, and the sax solo in “Old Time Rock and Roll”, among many others.

“I’ll never forget,” Dave says. “Alto arrived with no clubs or golf shoes. When I asked him if he left them in the car, he said he didn’t own any—he had never golfed before in his life. Turns out, when Alto got the call, asking if he would appear, he just said, ‘Sure,’ and came out. He just wanted to help.”

The first Mio Manz Benefit played at Beach Grove raised more than $500,000 in three days. These proceeds went toward a Mio Manz “Dream Lift” with the Sunshine Foundation, which took 85 kids to Disney World for a day.

Arguably, the most memorable person to grace the links at Beach Grove was a graphic artist who lived in Detroit, an ad man, named Billy Whitelaw. He was not a famous athlete, actor, or singer, but was a most singular figure. Emigrating from Glasgow, Scotland to Windsor—before settling in Detroit—Billy claimed to be related to the Right Honorable William Whitelaw, a Conservative politician who served Prime Minister Margaret Thatcher in the 1980s. Bragging of all kinds is heard up and down golf courses around the world. The difference with Billy’s boasts was that they were mostly true.

There is good reason why the Scottish are universally revered as good-natured rebels and rapscallions: Anyone who celebrates “Hogmanay”, eats “Haggis”, and drinks
“Famous Grouse” has earned the respect of even their most grudging detractors. In
an instant, the Scottish brogue can camouflage the Queen’s English behind a smokescreen of rolling Rrrr’s and pronunciations that threaten to pull words apart… That is the mark of a real character. And that was Billy Whitelaw.

“Billy was the jewel of the Club,” Dave recalls. “Everyone just loved him.”

Fourteen years Dave’s senior, Billy was light years ahead in life, running his own
advertising company in Detroit, bringing clients and friends to Beach Grove each week. Wearing his customary plaid tammy and filling the course with a brogue that could unsettle sand traps, his voice could often be heard in the pro shop, saying to Alf Hill: “I’d like Wee Davey Batten to play with us today. Can you shake him loose?”

“We brought people to St. Andrews, when I was twenty years old,” Dave remembers. “Members Dr. Garth Annisette, Dick Sheldon, Dr. George Koppert, Dr. Greg Hasen and others came with us for ten-day tours of Turnberry, Loch Lomond, Western Gailes, Carnoustie, Muirfield, and some real down and dirty golf courses, too. By the end of the tour, you knew you had golfed! And with Billy as our tour guide…” Dave shakes his head, smiling.

It was through Billy’s machinations that the legendary Jim Flick came to Beach Grove. Flick was instructor to PGA legend, Jack Nicklaus, for 35 years. It was never easy to trace the origins of Billy’s efforts, but the best guess on how he met Jim Flick was while playing the Bob Hope Chrysler Classic.

Few outside his sphere ever heard of Billy Whitelaw, but anyone who met him never forgot him. As Billy, himself, might have said: “Noo aats a rale character!”

Recalling the memories, Dave appears physically transported. Catching himself lost in thought, he chuckles: “I don’t know how my life would have turned out without Beach Grove. The fun we had there.”

Dave and his wife, Pat, had triplets: Jordan, Jarrod and Jenna, who all grew up playing golf at Beach Grove. Although they all showed promise, Jordan took lessons from Jim Flick for a while, before landing a golf scholarship to the University of Texas in El Paso.

“Beach Grove has five decades of my family’s life,” he reflects. “I was married in the Club. My kids are all members, and my grandkids are starting to golf here. For more than 50 years, I have walked into that clubhouse. So many good things derived from there in my life.”