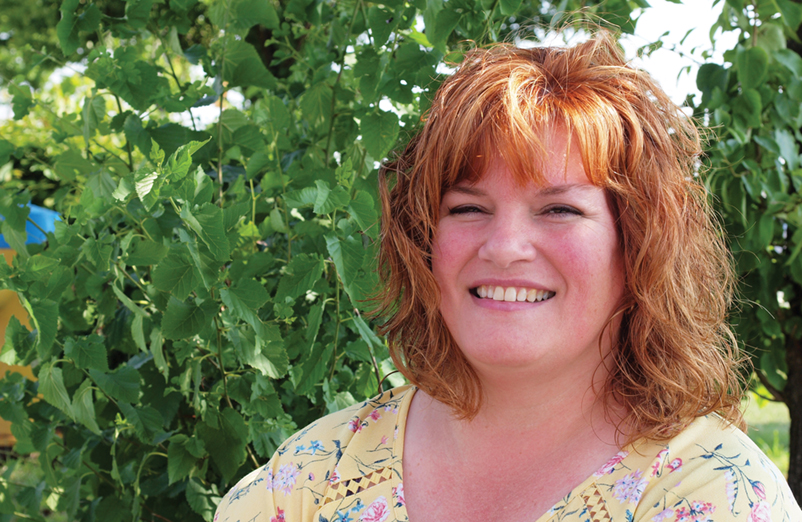 Karen Koski Shows Her Artistic Side with a New Book

It’s been a long time between stories for Karen Koski. She was born Karen Clark and grew up in Kingsville. She wrote her first book in Grade 8. It was a children’s story, for which she received an author’s award. Then, she stopped writing until about five years ago when her two daughters were “a little older and I had more time.” Her husband is employed by the Ford Motor Company.

Karen was a dyed-in-the-wool county girl, admitting that she was somewhat of a ‘tomboy’. “I spent a lot of time at Lakeside Park. I loved swimming, jumping into creeks to chase frogs and riding my bike…you know, a lot of things that kids don’t do anymore. I didn’t mind getting dirty, or having soakers in the creek.” When it comes to other talents, like music, she says she has absolutely no ability whatsoever and that, “my brother has it all.”

After finishing her elementary school years at Kingsville Public, Karen attended Ste. Anne’s High, which at the time was in Tecumseh. She studied social work at the University of Windsor but gave it up after a year because she found the problems that had to be dealt with were too depressing. She got a job working with kids with special needs…something that she really enjoyed, until she was called to work for the ambulance 9-1-1 dispatch center. Again, it was her desire to help people that kept her on duty for about a year. 22 years ago she was hired by the Windsor Fire Department as a communicator. For the last two years she’s been a fire inspector with the department after gaining the necessary qualifications. Continually working to improve herself, Karen recently returned from the New York State Fire Academy where she studied fire and explosive investigations. She proudly states that she was the only female in the class.

A licenced private investigator, Karen became interested in writing again after joining a writers’ group at the Windsor Library. So she set about preparing for another book. Just recently released, the book is titled ‘The Gimmal Ring’, a 120-page gem aimed primarily at 9 to 12 year-olds, even though a number of adults have also picked up their copies. While much of the process went smoothly, Karen experienced one hiccup when she approached, Mirror World, a Windsor publishing firm. Seems the ending wasn’t to the publisher’s liking, so the author was turned down. Undeterred, Karen re-wrote the ending and ‘voila’, the manuscript was approved and published by the local company that specializes in escapism and fiction.

‘The Gimmal Ring’ takes place in Windsor and Essex County…much of it in the town of Kingsville. Local readers will readily identify with the book because of its references to familiar places. “Staring out the window, Gwen let her mind wander as she watched Gage balance on rocks while attempting to cross Coghill Creek.” As the story unfolds, Gwen is determined to attend the Gimmal family gala which is taking place at Willistead in Windsor…and this is where the story begins to take the reader on its mysterious tour. There’s even a reference to one of Kingsville’s most popular eateries: “Let me guess, you’re referring to a constellation and not the The Big Dipper Chicken Finger Dinner they serve at the Chuck Wagon Diner.”

Much more than a piece of jewelry, the Gimmal Ring is a secret society that feels it must protect the earth from its biggest enemy…people. Each new member of the society is presented with a ring, described as a symbol of the group’s commitment to protect the earth for a beautiful and sustainable future. Gwen and her brother Gage are two of the recipients. At their aunt’s home, the two siblings receive an ominous note, in code, claiming their parents have been kidnapped, and if they’re ever to be seen again, a specific formula must be found and a trade made by midnight. And so the hunt begins. “Everyone split up and started looking for clues.” The narrative moves along smoothly with its share of suspense and humor. For instance, the searchers are transported by a ‘Tele-Potti’. Basically, by following the instructions, it’s the toilet that does the transporting. Without giving away too much information, travelers read the instructions: “after destination has been determined, start device by depressing shiny chrome lever. You will notice that the hole in the centre of the water will become larger and larger, until it is wide enough to accommodate up to 4 adults”. There are three more steps before the operation is complete. Details are found in Chapter 7 of the book. Incidentally, the Tele-Potti adorns the book’s cover.

‘The Gimmal Ring’ is written in plain English with elements of mystery, action and adventure. It’s an easy read and at 120 pages, it can be absorbed in a relatively short time. Karen has a unique ability with words and has produced a fun story. We won’t do a spoiler alert and reveal the ending, except to say it’s not sad and leaves room for a sequel, which is already in the planning stages.

At $15 a copy, the book is available on Amazon.ca, at Barnes and Noble, Chapters and Indigo, and Juniper Books on Ottawa Street. For more information on Mirror World Publishing in Windsor, log on to www.mirrorworldpublishing.com.

‘The Gimmal Ring’ is certainly worth your attention.