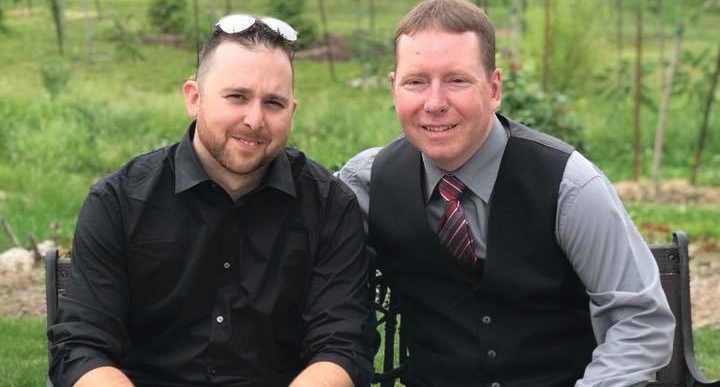 Of all the special occasions Jordan Guenette and Derek Bacvar spend together, they both agree that right up there is Kidney Day.

The two men will always remember their wives’ and children’s birthdays, their wedding anniversaries and May 8, the day Jordan gifted one of his kidneys to Derek. “He gave me my life back in 2012,” Derek says. To mark the turning point in both their lives, the organ brothers and their families gather for a homecooked meal to celebrate the vitally important anniversary.

Their special relationship had a sad and worrying beginning. Jordan, a Windsor native who moved to Timmins for work in 2008, was alarmed when he found his cousin, Bill Martin, upset that his best friend, Derek, would likely die without a timely kidney transplant. Jordan had encountered Derek a few times previously in Timmins and recalled liking the young man.

“How can I help?” Jordan asked.

Along with several other concerned friends in the Timmins area, Jordan had his blood type verified for compatibility and gave the information to Derek’s doctor. It was the first step in determining if his kidney could be a replacement for Derek’s barely functioning one.

“A married couple and I were both found to be matches,” Jordan says. They all sat down together with Derek and determined who would be the donor. “The mill where I worked had just burned down and I was laid off while it was being rebuilt. For timing reasons, it made sense that we would give my kidney a try first,” Jordan says. If Derek’s system rejected it, his other friends would serve as backups.

Derek was overwhelmed that friends and acquaintances wanted to undergo surgery and give an organ to save his life. His own immediate family’s organs were already stretched to the limit. “When my mom learned she had polycystic kidneys, she was told there was a 50/50 chance her kids would also have it. We all got tested and three out of four of us had it,” Derek says. In 1998, brother Brad received a kidney donation from Chris, the only sibling free of the disease. Mom had a successful transplant in 2005 from an unrelated donor.

“I was around 13 years old when I was diagnosed with kidney disease. At that age, you don’t look too far into things,” Derek says. A medical specialist tracked the disease’s progress while advising Derek to limit his diet and stressful situations. By the time he reached his mid-thirties, Derek’s kidneys were worn down. “I had low energy and felt really unwell.”

He was put on the organ transplant list and began dialysis. Hooked up four times daily, his quality of life shrunk. “Without a live donor, I would have had to continue with dialysis,” Derek says. He figured his odds of finding one were slim. “If you don’t have a live donor, they put you on a universal donor list. The average wait is seven to 10 years because so many people require kidney transplants. Unfortunately, unless someone dies, you usually don’t get a kidney.”

“How do you ask someone to donate one of their kidneys to you? When Bill heard my news, he put the word out there. He was my advocate,” says Derek.

Jordan recalls, “From starting the donor conversation to getting to surgery, the whole process took about a year.” During the long trips from Timmins to Toronto General Hospital every two weeks for tests, he and Derek became close friends. They were both understandably apprehensive about Kidney Day but hoped for the best.

“I was on board all the way. I had a lot of support from Derek’s family, who were over-the-moon grateful,” says Jordan. “Some of my own family, including my parents, were very supportive; others not so much. I realize they were worried about my health.”

On Kidney Day, Jordan underwent surgery first. As soon as his kidney was removed, Derek was ready to receive it.

The first thing Jordan wanted to know when he became fully conscious was how his friend fared. Informed that Derek had responded well to the kidney transplant, Jordan wanted to see for himself. He had to wait till next day. “The medical team had told me beforehand the surgery would be harder on me and that Derek would bounce back much faster,” he says. After walking up two flights of stairs to Derek’s hospital room, “I was white as a ghost. I felt badly that Derek was so concerned for me – and he felt badly that I was feeling rough on his account.”

Derek says, “When I got the new kidney, it made me better. Jordan’s body got worse before it got better.”

Performing 20 to 30 organ transplants daily, “the Toronto General staff did a great job taking care of us,” Jordan says. Five days post-surgery, he was released from hospital. “Eight weeks later, I felt more like my old self.” By the time the mill was rebuilt, he was able to return to work.

A twice daily dose of anti-rejection medication helps Derek and his donated kidney keep healthy. Along with the functioning organ, the man also received a new lease on life.

In 2014, Derek married Janice, a lovely woman he met on the first day of dialysis. Jordan was honoured to be in the wedding party. “I was also there the morning their daughter, Alyssa Jordan, was born. She is three now,” Jordan says. He was touched the couple named their baby after him.

Derek is relieved his genetic kidney disease won’t be passed onto his daughter. “In 2003, when I was 27, I was treated for leukemia and couldn’t have kids afterward,” he says. He and Janice opted to purchase sperm to become parents.

Jordan, now age 31, has also become a family man, marrying Majesta and becoming stepdad to Kyella, now age 6, on June 3, 2018. At the Niagara Falls wedding, Derek made a heartfelt speech. “A lot of Jordan’s friends knew what he did, but they didn’t know me. I wanted to talk to them about what it means to me. Jordan’s incredible selfless act changed my quality of life. The room was in tears. So was I.”

“I’m glad that Randy, Jordan’s dad in Windsor, is proud of the decision his son made to step up and help someone else.”

“Being an organ donor was always something I was okay with but never really thought about until Derek needed a kidney,” Jordan says. “Derek, without knowing you, would give you the shirt off his back if you needed it. I had to do my best to help him.”

“Do your research about what being a donor involves. Ask your doctor about what to expect after surgery. It isn’t a scary process,” Jordan says. “It’s a huge gift that no one will ever forget. You are giving another person a chance at a better life.”

The Guenette and Bacvar families encourage everyone to take two minutes and register as a Canadian organ donor at beadonor.ca.