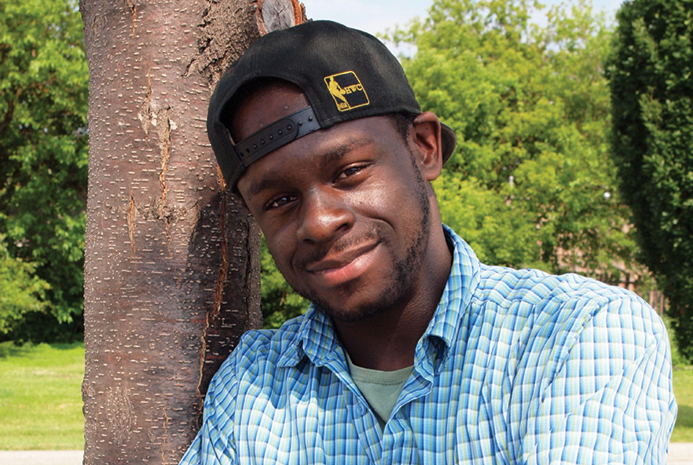 Matt Bhanks was born in Toronto. His family moved to Windsor when he was 3 years old. “I’m 25 now,” he says, “and I like it here, although I’d always be willing to go back to Toronto because of the larger population and greater career opportunities.” He holds an honors degree in Communications, Media and Film from the University of Windsor.

An accomplished artist and prolific writer, Matt is the author of four ‘Master Defenders’ books that have garnered a wide appeal over the last 6 years. Blessed with an incredible imagination and a talent for telling a story, Matt unwittingly began his quest for literary excellence at the tender age of 4, the same year he developed an interest in drawing. He loved drawing Batman and Sonic the Hedgehog and as he says, “I was pretty good at it.” By the age of 5, he had expanded his artistic horizons and developed his own character, ‘Canavin’, an alien who happens to be the central character in his novels. “I also grew up watching a lot of sci-fi, adventure, action films, which obviously had an effect on what I’m doing now,” he says, “a very strong, positive effect too.”

Those younger years in Windsor were a fun time for Matt. In addition to his love of drawing, he enjoyed playing basketball and video games… “average kid stuff, which is pretty much what I do now, except most of my days are spent writing and being an entrepreneur.” He also works part-time to make sure he has enough money to pay the bills.

He began writing during elementary school, but by the time he had reached the age of 10, his endeavors began showing real advancement and he became more serious about it. His first ‘Master Defenders’ novel started taking shape when he was about 18 as a grade 12 student at St. Joseph’s High. It began life as a short story for one of his English classes. “I did pretty well with it”, he says, “so I decided to expand it and turn it into an actual book – something I was very passionate about doing. So I put all my stories together into about 300 pages. I started in April of 2012 and finished late in July the following year.” His main inspiration, he says, was the first of ‘The Avengers’ movies which was released at the time. Knowing nothing about the publishing business, Matt got together with an editor and the two of them polished and tweaked the manuscript until its release late in July the following year. He says it’s a classic sci-fi story and can be enjoyed by anyone of any age.

The second book in the series grew to about 350 pages because the stories kept getting “bigger and bigger” and the situations became more intense. The third book is larger still at more than 400 pages, while the fourth and final edition is a doozie, something akin to a Stephen King effort at around 600 pages. “It was actually longer than that, but I took out 200 pages.” He’s currently working on Volume 5, because the stories “just won’t quit, as each conflict grows.” At the same time, he’s considering some short stories and is always hoping that his books could eventually be turned into a series of movies of tv shows. One of his closest friends would like to see the books’ characters turned into a series of video games.

‘Master Defenders’ are sci-fi action novels featuring many diverse characters in two alliances who are searching for rocks that give off wave-lengths to aliens, who in turn threaten civilization. And, it’s up to the heroes to prevent this from happening. Each volume, in turn, then presents more plots and sub-plots as the intensity grows. Matt never plans out a book, a task he describes as impossible. He simply starts writing and lets the story develop through his mind. As he says, “all you need is the main idea and trust your brain to develop and move the story forward.”

BOOK 1 is simply titled Master Defenders. It introduces readers to the main characters and sets up the plots. “Seeing every hero together made their thoughts speak bold words of encouragement. Together we are powerful”.

BOOK 2… ‘Codes of Corruption’, continues the story but delves deeper into the plot. ‘“Canavin gawked up at the others. They all had related sentiments, believing in the final key to save the city and eventually the world. Canavin intensely eyed all of them and said, ‘We defend.’ They nodded, finding their last bit of faith and courage.’

BOOK 3…‘Shields of Hope’. Primarily designed for older readers, this volume continues the story, growing in intensity. ‘“What if…” his mind pondered. “No it can’t be,” he said out loud. Canavin calmed his power and stored his energy back inside. He moved his hand to punch in letters. As he finished, there was an instant arduous ringing that lasted five seconds.’

BOOK 4… ‘Origins of Anarchy’ is an excellent prelude to Volume 5 which Matt is currently writing. Recommended for ages beginning at 12, the book provides some answers to questions raised in the previous three novels, but leaves the door open to more. ‘Moabero was in awe, seeing the blue and black armoured master. Star-Pix illuminated in the night sky, reflecting off the eye visors of his notable mask. His full body appeared like a supernatural defender. Most importantly he had three antlers, resembling his true alien origin.’

The demand for Matt’s books continues to grow, as more teenagers absorb themselves in the stories, which generally have a moral backbone. Some of these kids have been reluctant to pick up a book, but have now become avid readers. Many parents have praised the young author for his work and the fact that he’s inspired their kids to actually enjoy reading. He’s a regular guest at various schools in the area as he encourages young people to read. He says one of his most rewarding visits was at the Queen Elizabeth elementary school in Leamington in April for ‘World Book Day’.

While he sees the demographic for his books starting at the age of 10 and moving on up to older adults, he has sold quite a number of volumes to 60 year olds and 8 year-olds. Sales have been brisk and Matt can often be found at local festivals. One of his biggest thrills came about two years ago at the Windsor Comicon when Billy Dee Williams of Star Wars fame took an interest in the books and actually bought one.

Each book with color illustrations done mainly by the author, with artistic contributions from his brother Malcolm, sells for $35, while black and white versions go for $25. Discounts are available for purchases of multiple volumes. In addition to the personal sales, which Matt prefers, ‘Master Defenders’ can be bought at the University of Windsor book store and is available as an e-book on Amazon.ca and Google Play.

Matt’s books are designed to be read. His characters, alone, have some of the most imaginative names and the plots, with their underlying sub-plots, will keep lovers of science fiction and action engrossed for hours. And, like one particular brand of potato chips, you can’t have just one. Read the first book and you’ll have to get the other three …while anxiously waiting for number 5. 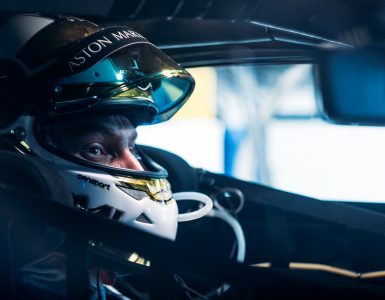 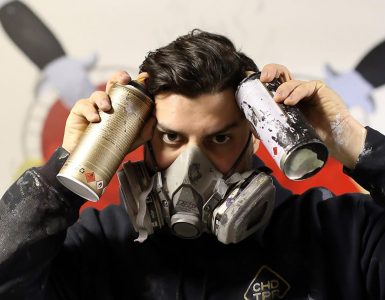 Painting Beyond The Canvas Story by Michael Seguin For some artists, a canvas can be claustrophobic. David Derkatz is a member of Windsor’s growing art community. A full-time painter for the last five years, David... 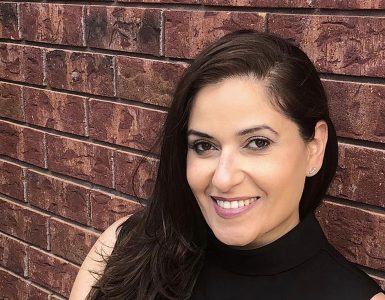 Momentum is a powerful thing, Mia Tannous explains. And over the last five years, Mia has taken advantage of her momentum to expand her professional skills in leaps and bounds