The Foxes Meet The Polar Bears in Breathtaking Arctic Safari

Story by Karen Paton-Evans
Photography by Lynne and David Fox

Returning from safari in South Africa with their digital memory cards filled with images of elephants, giraffes and lions, Lynne and David Fox of Amherstburg were keen to go on safari again – Canadian-style.

Flipping through Canadian Geographic magazine, Lynne spotted an ad for an Arctic safari promising the world’s only polar bear walking tour. “My husband and I love nature hikes and I have a passion for polar bears. We had to go.”

They reserved their spots with the Churchill Wild tour company 18 months in advance, eager to be rookie artic adventurers from Aug. 19 to 29 in 2019. “The safari proved well worth the wait,” Lynne says.

The couple flew to northern Manitoba to capture the world’s largest land carnivore, the king of the arctic, with their cameras on Aug. 19. What they found was so much more than wonderful polar bears.

“Until we went to Churchill, the farthest north we’d been was Jasper,” says Lynne. The tour company greeted the Foxes at the airport and accompanied them on a short flight on an eight passenger plane to Seal River Heritage Lodge on the Hudson Bay shore. Later in the trip, they flew to Nanuk Polar Bear Lodge, both recognized by National Geographic Unique Lodges of the World and owned by Mike and Jeanne Reimer and their family.

The Foxes were the only Canadians on the 16-guest safari. Travellers from Australia, New Zealand, Israel and the U.S. soon became friends.

“All of the people working at the lodge were so knowledgeable. After the delicious arctic gourmet dinners, the guides gave presentations on the region, its people and wildlife,” David says. As an amateur photographer, he appreciated lessons given by a guide who is also a professional photographer.

Before trekking into the wilderness, the guides laid down the rules for guests. When in the presence of a bear, “stand still. Don’t turn back, crouch, kneel – or even worse, run, which triggers the bear’s predatory instincts,” Lynne remembers.

On the safari’s first outing, “the photography conditions were challenging, with heavy rain pelting our faces and our teeth chattering,” David remembers. “But when we saw that bear in the viewfinder and took the photo, everything else was non-existent.”

Fortunately, the lodge loaned the adventurers appropriate outerwear. Temperatures averaged a low 5 and a high 17 degrees Celsius. “In all, we had two days of sunshine, one clear night and the remainder of the time, it rained. We were glad we brought our cameras’ raincoats.”

“The guides are respectful of the wildlife, while the animals are tolerant of us,” Lynne observes. “Approaching a polar bear, the guide simply talks to the bear in a calm, non-aggressive, loud voice, saying, ‘Hey, bear. Having a good day?’”

If a bear got closer than 60 metres, the guide pulled stones out of his pocket and banged them together. If that didn’t halt the bear in his tracks, a starter pistol would be fired. “In all the years the safari company has operated, they’ve never discharged a gun,” says Lynne.

One day, the safari group walked through a sparse cove of willows and came upon a big male polar bear dozing behind a bush. “We startled him and he startled us. The polar bear walked away and then turned back. The guide said, ‘Okay, bear. That’s close enough.’ And the bear stopped.”

Walking single file with a guide in the lead, another in the centre and a third bringing up the rear, the safari guests felt protected as they traversed over unmarked, uneven terrain and occasional ankle-deep muck. They rode in six-wheeled vehicles to cross rivers.

With an animal in view, the guests stood shoulder to shoulder, set up their tripods and took photos for the next half hour or more. Sightings of several families of polar bears including a mom nursing her cubs; black bears; arctic ground squirrels (called siksik in Inuktitut); wolves and other wildlife made the safari a rewarding experience.

Amongst the guests were a National Geographic film crew at work getting footage for a documentary on polar bears impacted by climate change. “We had dinner with the crew and learned so much,” David says.

Lynne discovered “bears are good photo subjects. They’d acknowledge us and look right at us. With some bears, you could tell we were the first humans they’d come into contact. Others were relaxed around us, looking at every single one of us before closing their eyes.”

“Polar bears rarely drink. They get everything from stores of fat they build up over winter. We didn’t see any polar bears that look emaciated. They all looked healthy,” Lynne notes.

Curious to “get a polar bear’s perspective,” she laid down in a vacated day den a bear had dug into the shore. “It’s quite comfortable. I took a photo of what the bear would see while in the den.” She then got out fast – after the guide informed her that she’d look like a tasty seal to a bear.

“Seals are the bears’ most important food source. The bear walks onto sea ice and eats and eats!” In one sitting, a bear can eat 20% of his bodyweight. Lynne says when ice melts in summer, “polar bears are lethargic as well as opportunistic, feeding on any dead carcass and snacking on berries or grass.”

Mating season in the spring leads to a fresh batch of polar bears in winter. The mother often has two cubs. Weighing only 1 ½ pounds at birth, “the cubs stay in the den with mom till March,” Lynne says. “The heaviest polar bear on record weighed 2,200 pounds and stood 15 feet tall.” Underneath the polar bear’s white fur, its skin is black.

Living in the arctic enabled the Foxes to have serendipitous encounters with wildlife. When a female wolf approached close to the lodge’s front porch, Lynne says, “she howled for her pack and they came. It was amazing to see.”

Beluga whales presented the couple with a magical experience one Saturday. While drifting in Zodiacs on Hudson Bay, “we were surrounded by a hundred belugas, singing to us,” recalls Lynne.

The aurora borealis set the night sky dancing with ethereal green flames for two hours. “The lights arced over our lodge,” Lynne says. “Our guide told us we were treated to one of only three times the northern lights appeared that summer and it was one of the top ten shows he had seen in his 20 years of guiding.”

“We also saw polar bears every day, which apparently doesn’t always happen on safari. The stars definitely aligned for us on our trip.”

Impressed by Churchill Wild for triumphing “over the logistics of operating lodges in the wilderness,” the Foxes are grateful the company makes polar bear walking tours available. They also have great respect for Churchill’s 800 residents. “Hats off to them for being so resilient and making a community in tough circumstances,” Lynne says.

When it was time to return home, nature gave the Foxes one more unexpected gift. High winds drove heavy rains horizontal. “All the planes were grounded and we had to stay at the lodge for two extra days,” Lynne happily reports. “One polar bear walked around the lodge’s perimeter both days. When he laid down, we added to the 5,000 photos we’d already shot.”

Thrilled by the Arctic’s “rugged yet breathtaking beauty,” Lynne says, “I wanted to capture every moment possible. We were in our own country yet felt like we’d traveled to another world. It was a dream to experience.”

For many of us, our canvases are slashed with dark shadows. However, one young Windsorite has found a way to spread some colour. 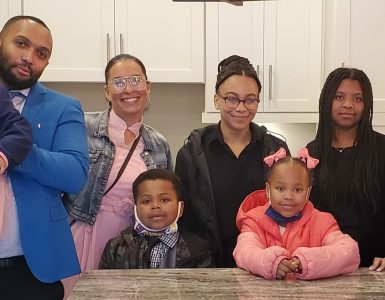 The Gift of Family

In September 2020, newlyweds Chantelle and Terrence Hurst opened their hearts to six orphaned siblings ranging in age from 4 to 17 years. It didn’t take long for their story to sprout legs…or for miracles to unfold in...